Pakistan’s Supreme Court has disqualified Prime Minister Nawaz Sharif from holding public office and ordered him to step down immediately.

A spokesman for the prime minister’s office announced shortly after the court issued its ruling that Sharif accepted the decision “despite his serious reservations” and relinquished charge of office.

The ruling noted that “having failed to disclose his un-withdrawn receivables constituting (overseas) assets” in his nomination papers filed for the 2013 elections and “having furnished false declaration under solemn affirmation….Sharif is not honest…and therefore he is disqualified” to be a member of parliament.

“The President of the Islamic Republic of Pakistan is required to take all necessary steps under the Constitution to ensure continuation of the democratic process,” it added.

Under the laws, Sharif’s cabinet also stands dissolved and the National Assembly, (the lower house of parliament), will now be asked by the president of Pakistan to elect a new prime minister.

The court convicted Sharif on charges of amassing overseas assets, concealing them and living beyond his means.

A U.S. State Department official described the development as an internal matter and said the U.S. looks forward to a smooth transition in Pakistan. 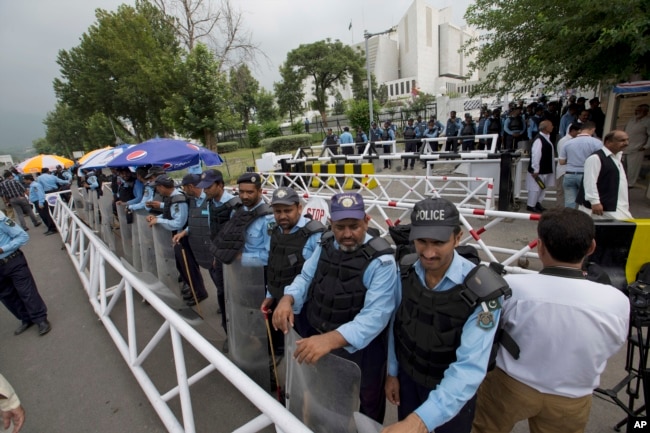 Speaking to reporters after attending Friday’s court hearing, Information minister Marriyum Aurangzeb said her ruling party is “not surprised but saddened” at the verdict.

“History is a witness that whenever Nawaz Sharif was removed unjustly, the people of Pakistan brought him back to parliament with a greater majority,” she said.

The court has ordered anti-corruption officials to conclude their probe into cases against Sharif’s children, son-in-law and Pakistani Finance Minister Ishaq Dar as soon as possible and announce a judgment within six months. A Supreme Court judge will oversee the implementation of Friday’s verdict.

Dar has also been banned from holding public office and ordered to step down.

The charges against the Sharif family and others stemmed from leaked financial documents known as the Panama Papers, which listed the prime minister’s children as holders of offshore bank accounts and posh overseas property.

The documents also named hundreds of other Pakistani citizens. Supporters of the opposition parties celebrate the dismissal of Pakistani Prime Minister Nawaz Sharif outside the Supreme Court in Islamabad, Pakistan, July 28, 2017.

Khan’s party led the legal battle against Sharif and his family in the Supreme Court.

Khan welcomed the verdict as a victory for Pakistan, where until now he said laws were applicable to the weak and the powerful were not being held accountable for their crimes.

“Today, I am happy for Pakistan that for the first time the Supreme Court has ruled against a sitting and powerful prime minister. The entire nation is celebrating it (the verdict) because it has given us hope that we can also progress like other countries and even in this country the powerful can be brought under the rule of law.”

The judges ruled that Sharif has been disqualified from office because he had been dishonest to parliament and misled the court while providing details of his wealth.

It was not clear immediately as to who will be appointed to take over from Sharif to complete the five-year term of his party’s government which is due to end in June 2018. 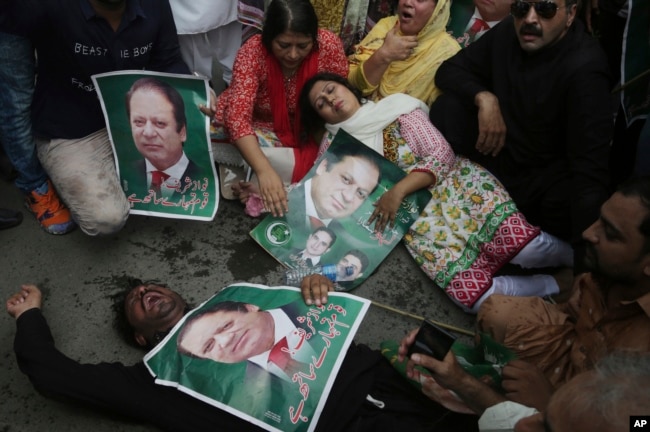 Supporters of the Pakistani ruling party Muslim League headed by Nawaz Sharif gesture during rally to condemn the dismissal of their leader in Lahore, Pakistan, Pakistan, July 28, 2017.

Sharif twice served as prime minister in the 1990s and on both occasions his government was accused of massive corruption and mismanagement.

The 67-year-old politician was elected a third time in 2013, after he had returned from years of exile in Saudi Arabia.

Sharif has denied wrongdoing and has also alleged a conspiracy against him, though he hasn’t named anyone. His allies have spoken of elements in the judiciary, backed by Pakistan’s powerful military with which Sharif has strained relations, acting against the prime minister.

The army has denied any direct involvement.

The legal proceedings against Sharif have captivated Pakistan, where those in power are seldom subjected to the kind of scrutiny undergone by the premier.

ICAO ends its operation to control Somalia’s airspace in Nairobi

Ethiopian PM Abiy outlines his vision for a new chapter in Ethio-Somalia ties.

the meeting Trump and Kim are still working.